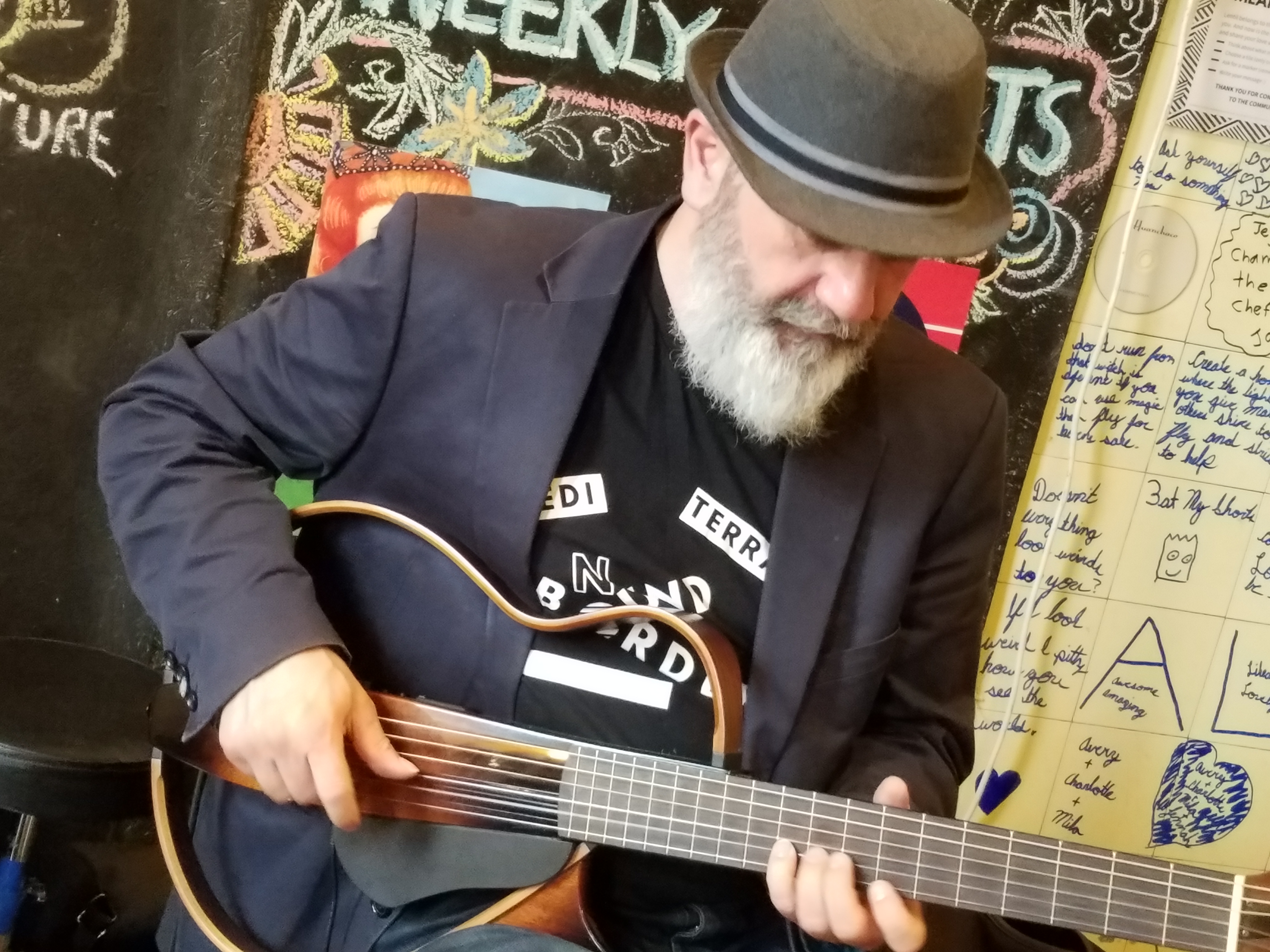 Passionate & inspired guitar playing are the two words that came to mind while listening to Rosario’s second CD titled “Intuition”, that beautifully brings together the diverse styles, Mediterranean, classical & folk. While there are many technically proficient guitarists, it is those who play with warmth & expressiveness that set themselves apart. With “Intuition”, Rosario has recorded a truly distinctive CD that clearly establishes him as a member of the upper echelon of creative guitarists.” Norman Beberman, GuitarNation.com

“I love the mellowness of the album with all its various fusions of flamenco, classical and folk … The finger/fretwork is excellent!”
(Tony Bates, 3WBC FM)

“Those who enjoy guitar music that flows like a cooling stream over the soul should hear this session … This music relaxes the listener and enhances immediate pleasures no matter how passive.”
(Michael Foster, Canberra Times)

“Rosario takes you from breath to life to wonder in this guitar album. He caresses the classical so well it speaks greatly, and tells of his own styling … Rosario’s guitar sang the way I like guitars to sing.”  (Bill Freeland, Maverick USA)

“Perhaps as well known in Italy, guitarist Rosario De Marco, has recently released a most relaxed and highly enjoyable CD on the Move Records Label. Rosario proves himself to be not only a more than capable guitarist, but also a fine composer of these lightly jazz influenced world music originals. The CD was recorded between April and May 2001, at the Move Records studios Eaglemont, Victoria, Australia.

Rosario is featured exclusively on acoustic nylon string guitar through out the recording.  On many tracks he multi-layers his guitar parts to arouse and maintain the interest of the listener while he weaves his aural web of Mediterranean influenced music. He achieves this by freely mixing diverse elements – the tonalities of flamenco music, the textures of classical music, the melodic nature of folk music, the improvisation of jazz and the rhythms of modern popular music – into one seemingly complete whole.

The gentle solo guitar of the all too brief “Alberi” (Trees)  begins the CD. This is followed by the multi-tracked Mediterranean inspired “U.W.M.” (United World Music).

The title track “Intuition” begins with gentle vocalisations which move into the gentle yet haunting multi-tracked main theme of “Blu” (Blue).  The briefer “Sky” with its looser rhythms prepares the listener for the more popular rhythms and harmonic structures of the successive tunes “Sunday” and “Dance”. The use of harmonics, captures the ear for the more meditative and searching nature of “Dune”. “Chi te Manne” (Who brings you here?) returns to the use of multi-tracked recording techniques. The solo performance of the searching, thoughtful “In te” (Within you) contrasts with the more rhythmic floating 6/8 feel of  “Honduras”. The final selection “Yellow” freely mixes all Rosario’s influences into one comprehensive whole to bring the CD to a satisfying conclusion.

Beautifully recorded, with pristine clarity which underlines the delicate nature of this music. If you enjoy music that is quiet, delicate and reflective then this is certainly the recording for you.  More information on Rosario De Marco and this recording can be found on hid website www.rosariodemarco.com  “ Reviewed by Greg Fisher for “Jazz Views”

“Rosario De Marco’s album Light and Shadows was recorded in Italy, and released in Australia at the turn of the millennium. Mostly acoustic guitar, with some subtle percussions and keyboard, it is a tribute to Mediterranean folk-derived music. However, it is far more than this. The music is scattered with tiny clashes that create moments of modal ambiguity – repetitive, but with subtly introduced variation. And exemplar of this is the track U.W.M, which features a repetitive motif on guitar and percussion gradually modulated as the track progresses, but never deviating far from the central theme.
In other tracks such as Honduras, De Marco displays his harmonic sensibility and sophistication. With virtually no melody, nor any gross variation on its pulsating rhythm, De Marco builds a fascinating and elegant harmonic structure. It would be difficult for even the most jaded musical sensibility to become bored with this music. The more ballad-like tracks have a dark, dancing melodic grace reminiscent of Sting’s more latin-informed tracks, such as Fragile.

The music is also notable in that, while it rewards close listening, it is very pleasant as background to food or conversation, although if you have it playing on a warm night while you dine with an intimate friend, be prepared for the subtle stirrings of emotions that might ensue – this music is neither passive nor passionless.

De Marco is a beautiful player. His technical performance is generally superb, without in any way interfering with the passion of the music. In fact, I suspect that the odd fluffed note has been left in because the performance on that particular take was the best overall – an eminently respectable and venerable approach to performance which has regrettably fallen into disuse as the recording process exposes more and more of an artist’s technique. No, De Marco’s quality is easy to sense but hard to define – call it feel, soul or even spirituality. Along with his musical sophistication, this quality lifts his music well above the ruck.

Although De Marco’s music could be described as Mediterranean, it is informed and modified by the European art music tradition. He keeps this influence subtle, creating a music that is eminently listenable (as so much modern European art music is emphatically not) but not coarsely repetitive in a primitive folk sense (as is so much ethnically-derived music).
In summary, the music of an urgent, passionate, romantic and very talented soul.